← Picturesque places to visit in Britain
All roads lead to London. WTM Preview →

900,000 spectators came to UK for big matches last year, with one in five going to Manchester United

Nearly a million overseas visitors travelled to Britain last year to watch football matches, according to research confirming the popularity of the UK as a leading sports tourism destination. Despite the high price of tickets and the problems of violence and racism in the game, new figures from the national tourism agency reaffirm the global allure of British football, particularly the Premier League. 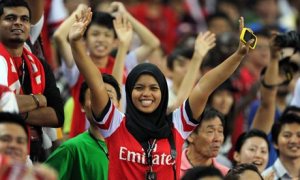 Figures compiled by VisitBritain show that 900,000 football supporters visited Britain last year, a figure tourism bosses hope will be further supplemented by the sporting success of the Olympics.

Hugh Robertson, the minister for sport and tourism, described the Premier League as “one of this country’s most successful exports”. He said: “It is no surprise that it has become a big draw for tourists who want to experience the most exciting league in the world.”

Football tourists collectively spent £706m, or £785 per fan – £200 more than the average visitor to Britain – with many arriving during the traditionally quieter period for tourism between January and March.

Four in ten of those who attended a match said watching sport was their principal reason for visiting the UK. Football was also found to encourage visitors to explore beyond London, with the stadiums attracting the largest number of overseas fans in the north-west.

Almost one in five watched a game at Manchester United’s Old Trafford ground, followed closely by Anfield, home of Liverpool.

In terms of armchair support, the Premier League is already established as the biggest continuous annual global sporting event on television in the world, with matches viewed in 212 countries and coverage available in some 720m households.

Richard Scudamore, chief executive of the Premier League, said: “It is now the most watched and supported football league in the world and there’s a huge amount of effort being made to connect with our 900 million international fans. Our clubs have worked very hard to make Premier League grounds more welcoming and are striving to deliver a first-rate experience for all fans.

“Little, though, beats the thrill of a Premier League match day and it’s very encouraging to hear that football can play an important role in increasing the numbers of international visitors to this country.”

The research also found that around 1.3 million tourists travelled to Britain for a live sporting event last year, four per cent of all visits, with the estimated total spend calculated as £1.1bn.

The greatest number of spectators for golf came from the US, rugby was popular with the Irish and French, while cricket attracted the most visitors from Australia.
Mark Townsend – The Observer, Sunday 21 October 2012
Full article: http://www.guardian.co.uk/football/2012/oct/21/football-tourism-premier-league

← Picturesque places to visit in Britain
All roads lead to London. WTM Preview →